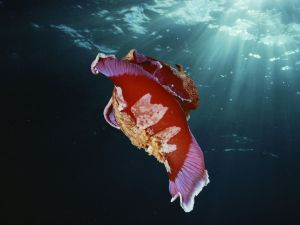 Our stay in Bali wouldn’t have been complete without at least one night dive, so after enjoying the muck dive and visiting the Dropoff once again, we returned to the USAT Liberty wreck in Tulamben.  After a 2-hour rest and a light meal, we walked to the beach to prepare as darkness approached.  As I had already experienced, the first 8m or so was a slow descent over the sandy bottom.  One of the number one skills a diver must focus on while night diving is buoyancy, because your perception of depth is slightly off, you are using a torch which can make for some awkward hand movements, perhaps you are over-breathing if anxious, and despite the torches it’s difficult to see what’s below.

Under the light of our torches the wreck slowly came into view, and we swam alongside following the exact same route as the previous day.  I felt slightly more stable holding onto different parts of the wreck, and got up close to some interesting macro life.  Tiny crabs, shrimps and nudibranchs that had been hiding in holes seemed to transform, crawling over the wreck and hard coral.  Maybe they were in search of food, or simply attracted by our torches.  Around the corner were shoals of fish hiding in the depth of the wreck, watching us as we passed by and shined our torches at them.  The parrotfish, often seen in Bali, apparently spins a mucous cocoon over its entire body and can look very interesting at night, like a shiny display case.  Other fish, perhaps large groupers or red snappers, were more curious and swam by quite close to us, while lionfish hovered near the wreck and overhead, slowly stretching out their large fins like huge flowers.  Waving our hands in the water we also got a good look at some shiny phosphorescent plankton.  However, the big highlight of the night dive was the Spanish dancer, the biggest nudibranch in the world that quite literally danced for us on the sandy bottom as our dive came to an end.  Fascinated by this, I went online and found some interesting facts on this creature:

Night diving is undoubtedly exciting.   For one thing, the marine life is different.  It could be fast asleep, or coming out to hunt under the light of a torch.  The feeling of uncertainty and anticipation as you wait to see what might emerge before you can be extremely thrilling.  But several precautions must be taken when planning a night dive.

It is important to go to a familiar site.   Diving at the same spot during the day will allow you to become acquainted with layout, depth, trails and hazards.  Knowing your gear is another point to remember.  Make sure that you know where everything is, what it does, that it’s comfortable and in good condition.  Temperature must also be taken into account.  Bearing in mind that it will fall at night, wearing some gloves or an extra vest underneath a wetsuit will make a big difference and make the dive more comfortable.  Gloves are also good for avoiding skin irritation or cuts in case you bump into something.  Torches must always be fully charged and checked beforehand, while back up lights are vital in case of any emergency, for example if a torch suddenly doesn’t work. The light must always be pointing directly in front of you.  Don’t shine it into your buddy’s face!

During a night dive, a world that you thought you knew can appear completely different.  Although many new divers (myself included) say that it’s scary not knowing what might be lurking in the distance, night diving is extremely popular.  Plucking up the courage to try it can offer divers a chance to confront any personal fears and gain a new sense of confidence.