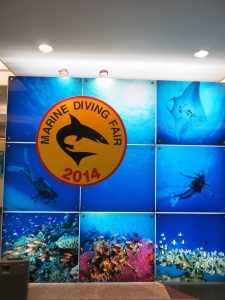 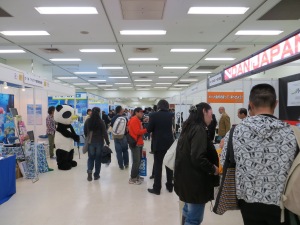 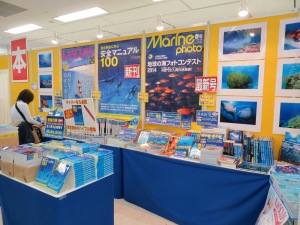 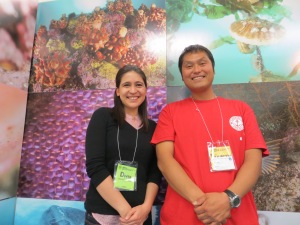 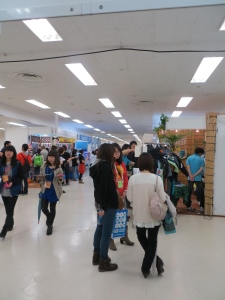 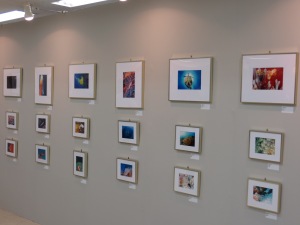 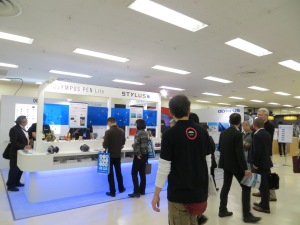 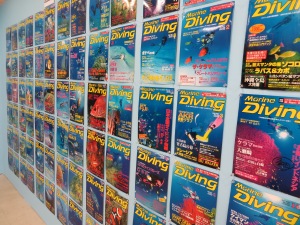 Last weekend I went to the Marine Diving Fair in Tokyo’s Ikebukuro district to hear the latest from the largest scuba diving exhibition in Japan. It features dive centres from other countries (mainly Asia) and is a great opportunity to find out more about possible dive sites, holiday destinations, pick up some dive gear in a sale or listen to short talks about underwater photography or dive-related medical issues.

Upon entering the venue I could feel the tension and excitement building among the many visitors and those who had come to represent their dive school or resort. Today was the culmination of months of preparation.  For the visitors, it was an opportunity to learn more, establish contact with the dive schools and decide on their next diving destination.  For the dive schools it was a chance to gain some new customers and present their services, goods and special offers.

First up, following on from last year, I spoke to Hiroshi Sato (with me in the above photo) who established Sanriku Volunteer Divers, a volunteer group that’s been diving almost every day clearing up areas affected by the March 2011 earthquake and tsunami. Hiroshi gave me his insight on how things are going:

Bonnie: How much of an increase has there been in the number of volunteers?

Hiroshi: We now have about 3,000, mainly from Japan and abroad such as the Maldives, Thailand and the US. Foreign volunteers learn about us through Facebook and stay about one week. Japanese volunteers tend to come from regions that have also experienced disasters such as Hiroshima (atom bomb) and Kobe (Great Hanshin Earthquake).

Bonnie: What is the sea like today compared to 3 years ago?

Hiroshi: Most large debris has been removed but smaller items still remain and there is always a lot to do. Some fisheries-related organizations have strict rules so it can be harder to clean some areas than others but on the whole work is progressing. As for marine life, visibility is excellent and you can see scallops, lumpfish, fat greenlings, eel grass and sea squirts.

Bonnie: What kind of activities are you doing now?

Hiroshi: As well as our regular diving, we help cultivate scallops, oysters, sea squirts and seaweed and conduct underwater surveys. There are tasks to do on land such as clearing debris and sorting anything we find underwater. We visit primary and junior high schools and use photographs to tell pupils about our activities and the condition of the sea. Some schools in the affected areas now have classes on reconstruction.  For adults, we hold seminars but there are also short talks in stations or department stores in big cities such as Tokyo and Osaka, and photo exhibitions.

Bonnie: Please tell me about your aims for this year and what the group will be doing.

Hiroshi: We want to widen the areas we work in and reach places that have not been entered into yet. We want to continue our record-keeping and tell people about our activities, but always with a feeling of gratitude. It’s important to always thank those who have expressed interest and are coming to help.

Bonnie: What’s been the most memorable thing for you during your work?

Hiroshi: I would say the bond that has been formed between the divers and fishermen. They get on extremely well. The fishermen say they went through a lot during the disaster but there have also been happy times.  By this they mean the number of people who have come from all over Japan and indeed elsewhere in the world, to help get things back on track.

I was impressed with just how far this group has come since March 2011.  Below are some shots taken recently by Hiroshi, showing what’s down below in the affected areas: 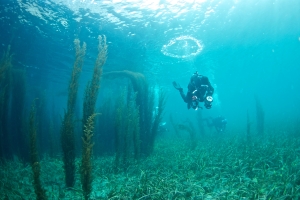 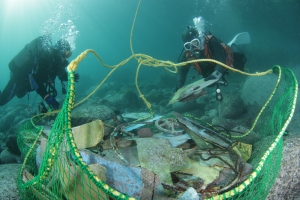 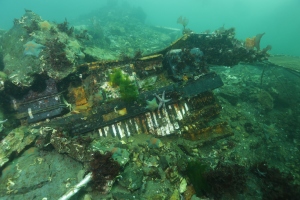 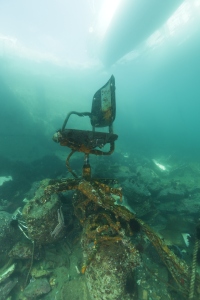 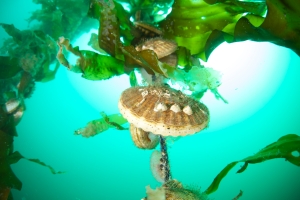 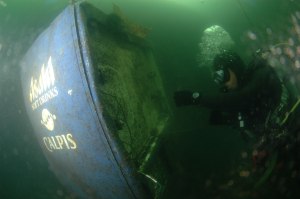 Heading towards more sounds of laughter and talking, I met a dive school based on a tiny little island called Notojima off the Noto Peninsula on the Japan Sea Coast, another stretch of water in Japan that seems to be an upcoming hotbed of diving activity.  Notojima is famous for its aquarium which has about 500 species and over 40,000 sea creatures from all over Japan including ones that inhabit the Noto Peninsula Coast.  Compared to the Pacific, the water here is colder and fresher but is home to rich seaweed, kelp forests and a range of less tropical marine life.  Divers can also enjoy dolphin swims and fun dives during the winter as well.  Information was also available on another place further up the coast from Noto – Sado Island, where the best time of year to dive is said to be September and October because of the visibility (20m range) and sea temperature (about 22-23C).  Sea slug fans will apparently be very satisfied, while groups of Kobudai, or the Asian Sheepshead Wrasse, are often spotted as well.  An extraordinary pinkish-grey fish with large swelling-like protrusions on the ‘forehead’ and ‘chin,’ it is said to be extremely friendly and often swims close to divers.  Right now I don’t often hear about diving along the Japan Sea Coast but judging by the number of people at each booth this area will undoubtedly become more well known.  For those wanting warmer destinations, several schools from the Ogasawara Islands were out in force and now that Ogasawara is a World Heritage Site, there’s likely to be even more diving there in future.