Last week on Thursday 9th April I headed for Singapore to attend my first ever Asia Dive Expo, the longest running dive show in Asia that’s otherwise known as ADEX.

Although the show is mainly for promotional purposes like last weekend’s Tokyo’s Marine Diving Fair, it’s an event on a much bigger scale, a chance to network, get tips and advice from underwater photographers, find some great deals on magazine subscriptions or sit down with a coffee and catch up with fellow divers.

For me, ADEX was a great insight into dive fairs outside Japan. Without further ado, here are some bits and bobs from the big weekend:

Friday 10th: Despite the opening day being on a Friday, thousands of visitors seemed to be pouring in, maybe to avoid the weekend madness and enjoy shopping for new gear and making contacts. The actual opening ceremony got underway around 3pm when hope was expressed for an even bigger and better show than before.

I was particularly looking forward to catching up with the Green Fins team after spreading the word about them in Tokyo last week. ADEX had much more of a conservation focus than Tokyo’s Marine Diving Fair, and word seems to be getting out about Green Fins’ environmental standards for the diving industry as visitors often came to check out the posters and stickers on offer, while a Green Fins talk was held as well. 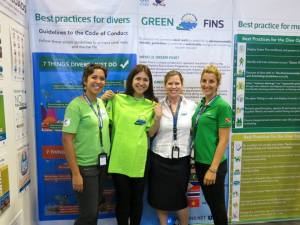 I also enjoyed meeting the staff at iSeahorse who have come up with a smart phone application that divers can use to upload any photos they take of seahorses. These photos are then picked up by scientists worldwide and contribute towards seahorse research. Marine conservation seemed to be high on the agenda at ADEX. There was much interest in Japan’s Sanriku Volunteer Divers, and magazines were keen to discuss possible articles on Green Fins’ initiatives as well.

Meanwhile a vast array of dive retailers was selling everything from wetsuits to fins at very good prices. One of them, Friendly Waters Seasports, had some bright and colourful BCDs on sale that would no doubt attract much attention if sold in Japan!

Saturday 11th: The second day opened early with heightened excitement as the weekend had arrived and the venue received an influx of visitors. Laurent Ballesta was a standout star with his brilliantly accessible talk on filming the coelacanth. His presentation pulled in huge crowds and generated buzz and excitement, while his photo display was stunning. I got to have a one-to-one chat with Laurent and was struck by some of the things he said. Listening to him, it hit home that as a diver it is not enough to simply take photos underwater. You need an idea, a goal, something unique or special (in his case the coelacanth) to stand out. Is diving in Japan my something special? Talking to Laurent certainly got me thinking. 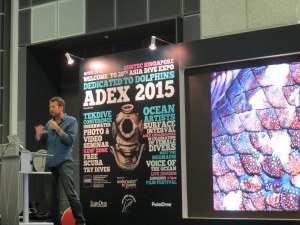 Tour operators, liveaboards, resorts and clubs from across Asia were also out in force. The Philippines booth was excellent with information from every corner of the country as well as a slideshow of underwater photos and footage taken at some popular dive sites. There were also lots of goodies to buy from the guys at Canon and other camera makers, some very impressive equipment to spend all your cash on!

Sunday 12th: On the final day, it seemed that divers were going crazy with last minute gear grabs, attending as many talks as possible and doing the final networking and meetings before the event drew to a close. It was a great day to be at ADEX as I got the chance to reacquaint myself with the contacts I had made over the past two days.

During the weekend I’d been struck by the number of magazines that were represented and was lucky enough to speak to almost all of them. Peggy from Action Diver told me how her boss had gone diving in Okinawa and enjoyed it immensely, while the staff at online magazine X-Ray Mag sat down with me to go through my underwater photos and discuss some Japan-related options. It seems that diving in Japan is not that well known in the rest of Asia and I would like nothing more than for that to change one day. I also spoke to the editor of Scuba Diver Australasia magazine Alice Grainger, who is due to publish an article I wrote recently on diving off Yakushima. She expressed interest in Sanriku Volunteer Divers and we discussed the possibility of publicising coral protection initiatives in Okinawa. 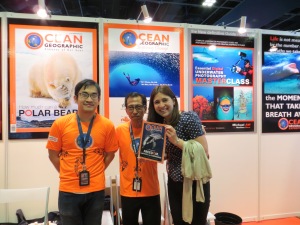 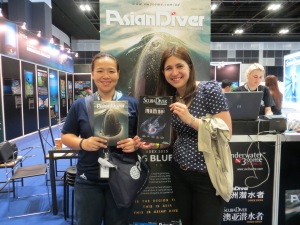 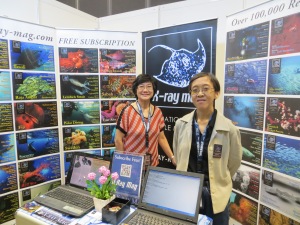 ADEX proved to be a great weekend with a vast range of exhibitors and speakers combined with a really nice location. For me however, the absence of Japan really stood out and it would be great to see Japan’s diving being represented there one day.