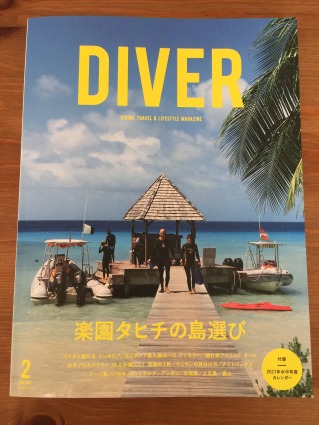 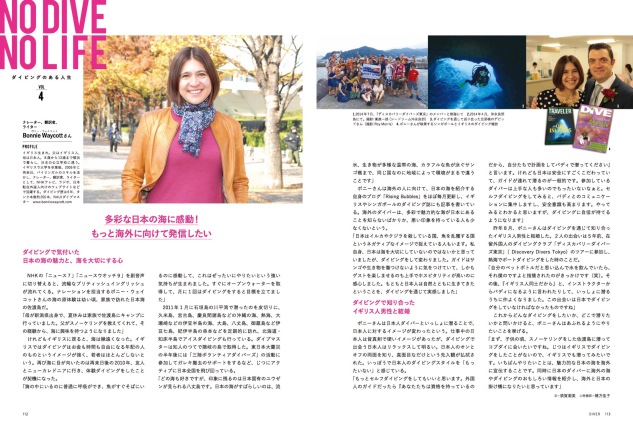 Late last year, I had the pleasure of being interviewed by one of Japan’s major scuba diving magazines DIVER, which introduced my work and efforts to promote Japan’s diving to other countries. Here is my English translation of the interview that appeared in the February 2017 issue.

Watch NHK’s News 7 and Newswatch 9 programmes in English, and you’ll hear a distinctive British accent. Bonnie Waycott, the face behind that accent, first became interested in the sea on Sado Island, where she often visited with her family as a child.

“My mother is from Niigata prefecture on the Sea of Japan coast, and every summer my family and I would go camping on Sado,” Bonnie said. “My father taught me how to snorkel there, and I’ve been fascinated by the ocean ever since.”

But when Bonnie and her family returned to England, the ocean became a distant memory. Back then, Bonnie had the impression that diving in England was more popular among older people who had time and money and that young people didn’t dive much. In 2010, after she’d returned to Tokyo to live, she encountered the sea once again when she went to New Caledonia with a friend and booked a try dive.

“Being in the water, breathing normally, with fish swimming all around me, was really impressive,” she said. “I knew then that I wanted to take up scuba diving properly so I became certified and set myself a goal to dive once a month.”

Bonnie started diving in Japan at Kabira Bay on Ishigaki Island in January 2011. Since then, she has been travelling across the country. She’s dived off Kumejima, Miyakojima and the Kerama Islands of Okinawa, Osezaki and Atami on the Izu Peninsula, the Izu Islands including Oshima, Hachijojima and Mikurajima, Kushimoto on the Kii Peninsula, and has even been ice diving in Hokkaido. She became a Dive Master on the Oki Islands, and six months after the Great East Japan Earthquake in March 2011, began working with a group of volunteer divers pulling debris from the sea.

“I love the sea around Japan, but Hachijojima has had a lasting impression because of the Yuzen (Wrought Iron Butterfly Fish), a species endemic to Japan. What I like about Japan is that its underwater environment differs completely depending on the region. You can see everything from ice floes to warm temperate seas with colourful tropical fish and vast beds of coral reefs.”

Bonnie’s blog Rising Bubbles introduces diving in Japan to readers outside the country. She updates it at least once a month, and also writes articles for diving magazines in the UK and Singapore. She says that divers outside Japan don’t know much about Japan’s waters and also have a bad impression.

“Some people have a negative view, and see Japan for its overfishing and the killing of whales and dolphins,” she says. “I’ve also felt that way, but I’d like to think that diving has changed that somewhat. The guides here do take care not to disturb marine life, and the hospitality at dive centres, as well as their determination to make sure the customer has a good time, is quite impressive. Diving has allowed me to see that Japanese people do live as one with the natural environment.”

Bonnie says that diving has also changed her impression of Japanese people. Those she works with are more formal and serious, but the people she’s met through diving are friendly and relaxed. However, she’s a little disappointed with the way Japanese people dive.

“I think they should dive just with a buddy, not with a guide or in large groups. A non-Japanese guide would probably say you’re certified so find a buddy and go diving,” she said. “But the Japanese have a huge hang up about safety and it’s normal for a guide to be with divers all the time. I’ve dived with a lot of really good Japanese divers who have great skills, and it’s a shame that they’re still being shown around by a guide. Diving without a guide allows you and your buddy to focus more on communicating with one another, and you have a much better sense of safety. You become a lot more confident.”

In August 2016, Bonnie married a British guy she met through diving. Her and her husband met five years ago during a diving trip to Atami with Tokyo-based group Discover Divers Tokyo.

“After the dive, when everyone was back on the boat, I grabbed a bottle of water and took a few sips when a voice behind me told me I’d taken his water bottle by mistake!” she said. “After that, our instructor said we should be dive buddies because we’re both British, and as we dived together more, we became friends. Maybe we wouldn’t have met if it wasn’t for diving in Japan.”

Asked what kind of diving she’d like to do and where, Bonnie is full of ideas.

“I’d like to go back to Sado Island and meet the kobudai (bulgyhead wrasse),” she said. “I’ve also never dived in England so that’s on the list, but most of all I want to continues introducing Japan’s diving to the rest of the world and share with Japan news and information on diving in other countries. I’d like to be a bridge between Japan and the rest of the world.”

ABOUT BONNIE
Born in the UK, Bonnie’s father is British and her mother Japanese. She grew up in Yokohama from the age of 8 to 13 and went to a local primary and secondary school. After graduating from university in the UK, she returned to Japan in 2006 and began working as a narrator, translator and writer for NHK TV, radio and websites for foreigners living in Japan. She started diving 6 years ago and has logged over 250 dives. She’s also a NAUI Dive Master (www.bonniewaycott.com)